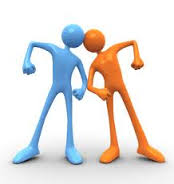 It is almost impossible to have a workplace without any conflict.  Conflict can be caused by a variety of factors but the root issue is that each person has an individual personality and sometimes it clashes with others.  The conflict may be focused on work issues and ideas, not the personalities, but someone may feel as those they are being attached personally.  When that happens, there are some other issues at play such as lack of trust, lack of leadership, lack of communication skills and high stress levels to name but a few, it is possible for conflict to arise.  The real problem happens when there are no strategies for conflict resolution and they escalate into unmanageable situations.  If you recognize that there is conflict in your workplace, whether you are directly involved in it or are charged with resolving it, then the following tips may be of assistance to you in order to once again create harmonious workplace relationships.

LARA is a strategy that is based on Listen, Affirm, Respond and Add.

“When engaging with others, often the best thing we can do is to listen, and to affirm what is being said.  Too often when we are not speaking, we are also not listening with intent to understand – we are simply waiting our turn to speak, then we jump to respond without affirming a single thing we heard.”  Tips and Tools for Constructive Conflict Resolution

This is about having the right communication skills in place and being aware of your own attitudes and preconceptions.  By listening properly to what is actually being said, then affirming it to check if you have understood it properly before formulating a response, you show that you are willing to hear both sides of an argument before coming to a resolution.

Nobody likes to be involved in conflict and we often feel it reflects badly and negatively on us, our personality and our work ethics.  If you enter a conflict from that position, it is far more likely to not be resolved properly, as you already have put yourself in a position of negative thought about yourself and the other person.  You must enter any negotiation surrounding conflict with the understanding that it is only natural to disagree, but the disagreement should focus around issues that are important to work issues and decisions.

“We are human: We all regress and act like babies sometime.  Cut yourself some slack, don’t be afraid of your mistakes, make amends and forgive yourself and others.”  10 More Tips for Effective Conflict Resolution

Staying calm, particularly when faced with someone who is very angry, may seem like an impossible thing to do.  However, it is absolutely vital that you do all you can to remain calm.  If not, you are letting your emotions run over you, and you will respond from a “fight or flight” reflex we all have.  When angry, you say things that you will later regret, and this means that rather than resolving a conflict, you are only escalating it or creating a new, even more difficult one.  Having the ability to remain calm is an amazing soft skill that everyone ought to develop.

“Arguing is ineffective because it raises barriers.”  7 Tips for Resolving Conflicts Quickly and Peacefully

Conflict resolution is something that all leaders and managers should be trained on.  During such training, they will be able to identify what their personal conflict resolution style is, and what the strengths and weaknesses in this style are.  It is very important to be aware of this style, but also of other people’s styles, so that you can adapt your communication to have a more positive outcome.  By knowing your own style, you will also be more aware of certain pitfalls that could accidentally make a conflict escalate.

The Everything DiSC Workplace Profile will give you a greater insight on how you present yourself when you are involved in a conflict with the personality styles of your co-workers. You will also learn about the motivation for their behavior, how they problem-solve and how you can create better relationships with them.  Each of these can be used either to your advantage to increase not only your effectiveness but the effectiveness of your team.

Often, particularly when we are called in to help resolve conflict between two other people, our immediate thought is on how to solve the problem that exists between them.  In many cases, the solution can seem so obvious that you wonder why the people in the conflict itself haven’t already seen it.  However, you are not there to solve a problem, you are there to resolve a conflict.  If you solve the problem, effectively telling people what to do, the issue that caused the conflict may have been resolved, but the people involved in it will still be in a state of conflict.  It is not your role to tell them what to do, it is your role to mediate and ensure positive relationships are restored.

“It’s easy to want to take sides to move a decision along.”  5 Tips to Resolve Conflict (Before it Gets Out of Control)

Not taking sides is perhaps even more important, although there are some exceptions.  For instance, if a conflict has already escalated directly due to the actions of one person, it is perfectly acceptable to tell them that.  However, a conflict is never completely caused by just one person, so although you may take sides on certain elements, you should never use that to fully resolve an issue.

When two people, or more, are involved in a conflict, there is often something deeper and more complicated going on.  Their personalities have clashed, and the further the conflict escalates, the more this will come to the foreground, until the initial issue has been completely lost.  Indeed, it could turn into a shouting match with those involved trying to score points by putting the other person down.  If you are a manager or leader, it is of vital importance that you are able to recognize the signs of arising conflict before it end up in a situation where people’s personal feelings towards each other have been ruined forever.  Resolving conflict can be very difficult, not in the least because you don’t want to get caught up in the crossfire, but it is vital that you do it anyway.

If the people involved in the conflict have completed an Everything DiSC Workplace Profile, then Everything DiSC Comparison Reports are great follow-up tools that can be used with each person to reduce their conflict.  The reports compare the DiSC style of one person with the style of the other person, shows both styles on the Everything DiSC Relationship Map and explains their differences and similarities in six specific areas. Each person receives their own version of the report, which includes customized questions to help them begin a dialogue about adapting their styles to work together more effectively.